Flagpole is an iconic movie from 2010 that explores the wonders, excitements, and embarrassments of growing up. If you are looking for a feel good comedy to sit back, eat some popcorn, and relax to, this is a great choice! Below, is a thorough summary written about this quirky little short film, by Ivan Kander.

There’s just something about the awkwardness of adolescence that makes it a ripe topic for film. As kids fumble through the transition from breezy kid indifference to “serious” adulthood, there is more than a fair share of relatable material to create both compelling comedy and drama. Flagpole, the Student Academy Award nominated film from director Matt Kazman, manages to perfectly convey this delightfully clumsy time—a slice-of-life teenage sex comedy where all the characters within can think of nothing but sex, but have neither the experience or knowledge to really do anything about it.

Zack, our gangly, dweeby hero is in love with Maddy. Well, perhaps he’s not “in love” as much as he is “in lust.” He fawns over her from afar silently watching and memorizing her every move. He’s not a stalker, just a dorky outsider struggling to survive amongst his peers. Schoolyard innuendo and rumor is the stuff of legend, providing brief glimpses of an exotic magical world that only a select few are privy to access.

From a strictly comedic standpoint, Flagpole delivers. The film drops us into the most uncomfortably hilarious situations possible. We watch with relatable horror as Zack finds himself firmly planted in Teenage Hell. But, there’s pathos amidst all the squirm-inducing comedic beats. Due to both its well-written script and the strong performances by the young leads, the film builds characters who you can’t help but feel for as they clumsily stumble through a decidedly confusing time, complete with erection euphemisms and high school power semantics. The kids act and talk like real teens—I think it’s safe to assume that director Matt Kazman is writing from experience.

The silences are as equally well structured as the dialogue itself. Long, awkward pauses are sprinkled into each interaction, fully representing teenagers who don’t know what to say just about as often as they do. It’s messily accurate, especially during the final scene where our nerdy protagonist confronts his long time crush. More is said by what is not, and that’s what makes the conclusion so fulfilling.

Flagpole, has been well recognized on both the festival circuit and online. It’s the rare sort of film that manages to cater to both sorts of audiences—accessible enough for the mainstream web video crowd, yet filled with enough artistic merit to collect impressive laurel leaves. And, perhaps that has something to do with the film’s relatability. In this particular case, we may just be bystanders to Zack’s teenage trauma, but it’s easy enough to remember a time when we too were just as confused, wondering ourselves if the girl sitting next to us in class really did have salami nipples.

Email ThisBlogThis!Share to TwitterShare to FacebookShare to Pinterest
Home 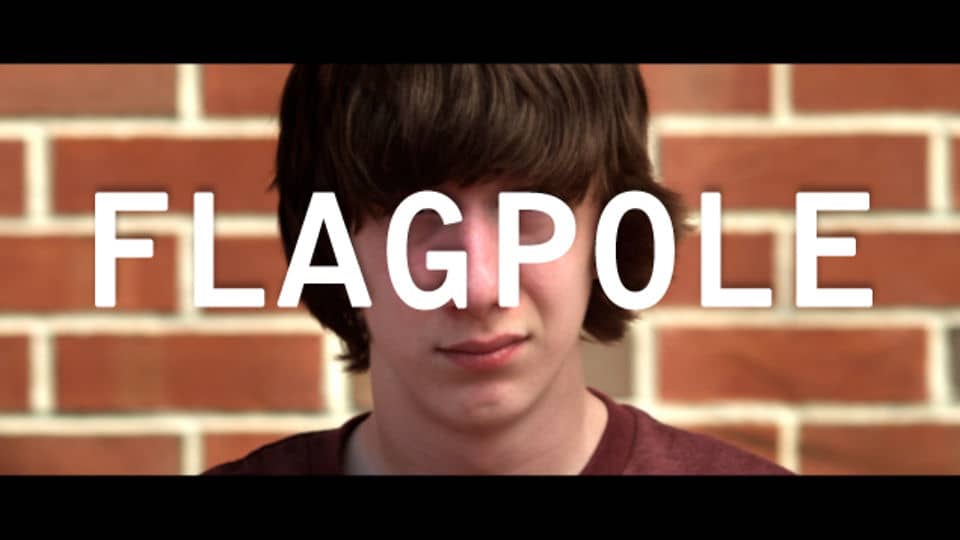